Our understanding of current and projected climate impacts results from our NOAA RISA team’s efforts to advance the state of the science in modeling and analysis. This includes the model evaluation work we did for our Integrated Scenarios project, which has proven to be a key factor in creating better local climate projections. It has also contributed to the ongoing conversation in the Pacific Northwest’s climate adaption and scientific community about how best to apply data from global climate models to the modeling of local climate impacts. CIRC also developed an advanced a method for downscaling climate model data to local levels, used distributed computing to hone the use of a regional climate model, created a simplified approach for understanding future changes in watersheds, and created a modeling framework to determine the cumulative impact of multiple coastal hazards.

As part of CIRC’s Integrated Scenarios project, our NOAA RISA team members, led by CIRC researcher David Rupp, performed an evaluation of data output from global climate models associated with the Fifth Phase of the Coupled Model Intercomparison Project (CMIP5). The goal of the evaluation was to determine which models produced outputs that were the best statistical fit for the Pacific Northwest. This was done by testing how well the models were able to simulate various measures of the region’s historical climate. The idea was that models that faithfully reproduced the Pacific Northwest’s past climate would also produce the highest fidelity simulations of the region’s future climate. 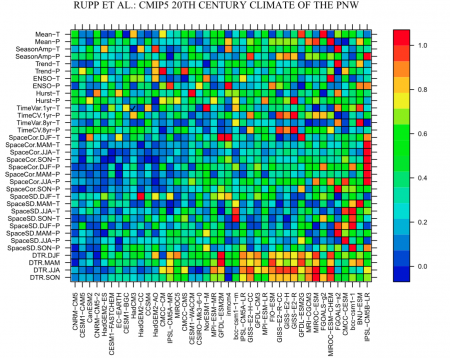 As their name suggests Global Climate Models (GCMs) model the whole Earth. They do this by dividing the globe into large three-dimensional, box-like cells that include the atmosphere to the space just above the ground. Inside these cells atmospheric dynamics are simulated within the computer. As with a video game or other computer simulation, the cells have a resolution that’s dependent on how much information can be packed into a given cell. For GCMs, the more cells you have to divide the world into, the more detailed and higher resolution that simulated world will be. (Incidentally, this isn’t just a metaphor; “resolution” is the term of art in the climate-modeling world.)

Yet, while engineers have consistently built higher and higher resolution into GCMs—thank you, Moore’s law—this resolution still isn’t fine enough to assess regional climate impacts in any great detail. Consider an important Pacific Northwest feature: the Cascade Mountains. Under the coarse resolutions of many GCMs, the Cascades are replaced by a kind of featureless plain that gently tilts upward toward Wyoming. This lack of detail produces a problem for climate researchers. The Cascades create a major rain shadow that makes the eastern half of the Pacific Northwest significantly drier than its western counterpart. That rain shadow needs to be accounted for. Detail needs to be put back on the map. Luckily there are two solutions: regional climate models and a process called downscaling. (See following section.)

With participation from the Oregon Climate Change Research Institute (OCCRI), CIRC researchers Philip Mote, David Rupp, and Sihan Li completed a unique Regional Climate Model (RCM) project that involved simulating the regional climate of the Western United States with the help of thousands of volunteers who ran the team’s climate simulations on their personal computers. The project, weather@home, employed the Hadley Centre’s regional climate model HadRM3P, and was completed through the distributed computing effort climateprediction.net. This allowed the researchers to create a superensemble, which is essentially multiple model runs employing different initial conditions (the precise state of the atmosphere and land surface at the start of a simulation) and perturbations of the RCM’s physics, creating what was, in effect, thousands of experiments.

A Note On RCMs & Distributed Computing

Regional climate models (RCMs), as their name suggests, simulate climate for specific regions of the planet.

Because they cover a smaller area than the entire planet, they can provide information at higher spatial resolutions (i.e., finer detail) than global climate models can using the same amount of computational resources. Finer detail alone, however, does not necessarily translate to more certainty in local climate change projections. In fact, the opposite tends to be true. More “noise”—in the form of natural climate variability—frequently accompanies more detail.

From basic statistics we learn that the most straightforward way to find a robust signal in noisy data is to increase our sample size.

In data collection, we can increase our sample size by running an experiment many times. In modeling, we do this by running multiple simulations. Unfortunately, this kind of computing power is often beyond the resources of many research teams. This is where the CIRC team benefited from distributed computing.

Global climate models (GCMs)—also called general circulation models—are concerned with the big picture. GCMs are highly complex computer programs that model the whole of Earth’s climate system. They do this by dividing the globe into large three-dimensional, box-like cells. Inside these cells atmospheric processes, such as the formation of clouds, are simulated. GCMs tend to be very coarse in their resolution. This means that they often miss important key local features, including mountains and how they shape climate across the landscape. This is where downscaling comes in.

Downscaling takes the coarse low-resolution data from GCMs and turns it into high-resolution data that accounts for local landscape features and local climate. For CIRC 1.0, University of Idaho researcher John Abatzoglou developed and honed a downscaling method called the Multivariate Adaptive Constructed Analogs, or MACA, method.

Rising temperatures and changing precipitation patterns are shifting when and how streamflows occur. But deciphering how climate change might affect any given watershed can be both time-consuming and expensive. Typically the modeling required to see how a given watershed is likely to respond to changes in temperature and precipitation under various climate scenarios is beyond the time, staff, and computational capacity of many.

This is where the work spearheaded by CIRC researchers Julie Vano, Bart Nijssen, and Dennis Lettenmaier comes into play. In several journal articles, these CIRC researchers describe how they applied and improved what’s called a sensitivity-based approach to determine how a given watershed is likely to respond to incremental changes in temperature and precipitation.

The difference in streamflow per degree of warming or precipitation change is the watershed’s sensitivity. The sensitivity analysis honed by Vano, Nijssen, and Lettenmaier is intended as a “short cut” method that can be used in conjunction with more computationally intensive, conventional modeling.

In their several papers on the subject, the researchers not only refined their approach, describing how to apply it to watershed modeling, but also compared how the sensitivity-based approach holds up against more conventional and computationally more costly, “full simulation” modeling.

TWLs combine factors—including projected sea level rise with increasing wave heights, projected changes in El Niño and La Niña events, the shape of local coastlines, and calculations of the tides—to determine by how much our coastal communities are likely to be inundated by the Pacific Ocean in the decades ahead. For instance, the Pacific Northwest coastline is likely to experience a rise in local sea levels from a couple of inches to roughly 1.5 meters (5 feet) by the year 2100.

However, we can also expect significant differences in the extent of the inundation from location to location due to the elevation of a location’s backshore and any climate adaptation measures adopted by coastal communities, among other factors. What’s more, El Niño events and large tidal events, which temporarily raise local sea levels, can also play major roles. The combination of these factors dictates how high TWL exceeds relevant thresholds for flooding and erosion impacts 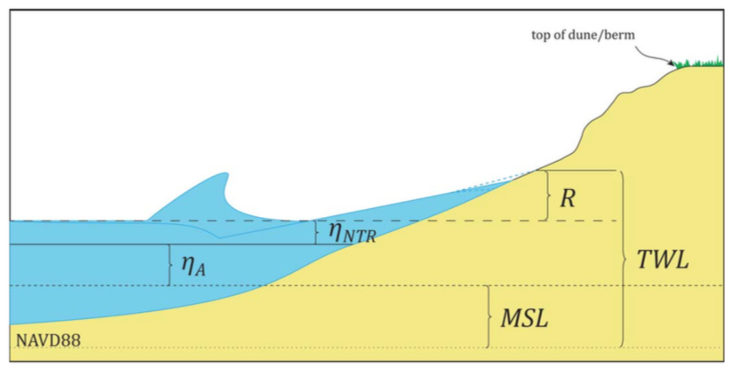