Confidence in projected precipitation for the Pacific Northwest is lower than confidence in temperature projections. Unlike temperature projections, there isn’t a consensus that our region will become either notably wetter or drier under human-caused climate change. What the climate models do suggest, taken together, is that annual precipitation might stay about the same or increase slightly (only a small majority of models project wetter conditions). At the same time, Pacific Northwest summers might become slightly drier while our winters might become slightly wetter. 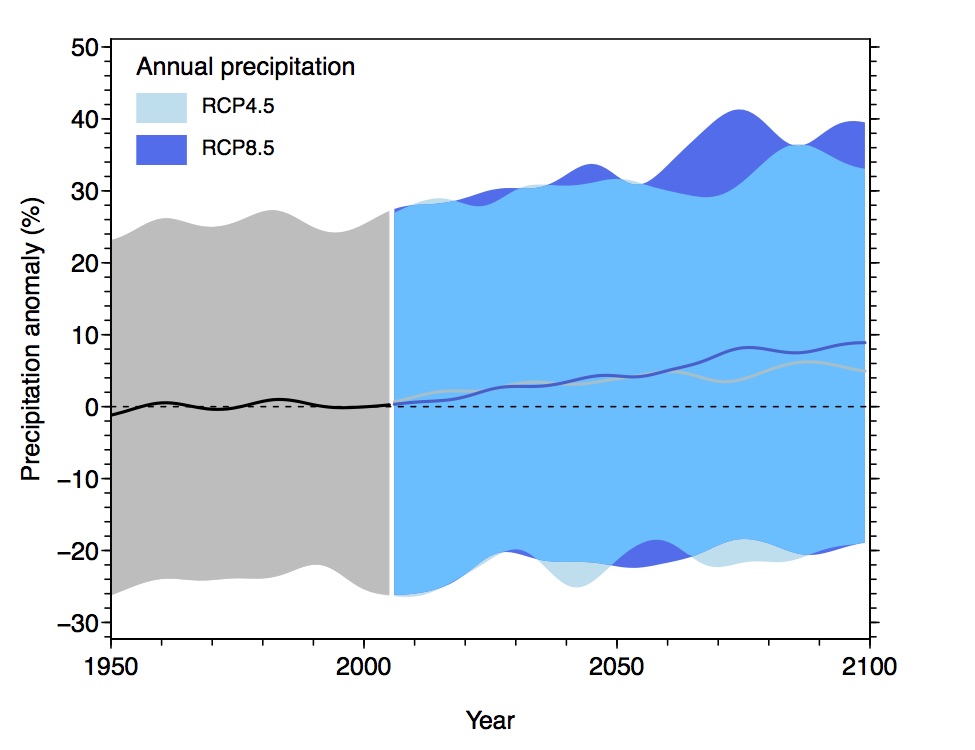 This graph shows annual precipitation simulations for the Pacific Northwest to the year 2100. Note: The data show a slight increase in annual precipitation. However, as we note above, this increase does not represent a large departure from the historical norm. What’s more, these projections have a low degree of confidence to them.

Here, the dotted zero line represents average annual precipitation for our region for roughly the second half of the twentieth century. The gray section represents a simulation of the historical period. (This was done using the same Global Climate Models used to run simulations into the future. This process of running climate model simulations over periods for which you already have records is called hindcasting.) The light and dark blue colors denote two emissions scenarios: RCP 8.5, a high-emissions scenario that leads to a steady upward trend in temperatures; and RCP 4.5, a middle-of-the-road emissions scenario that leads to slower growth and eventually a leveling off of temperatures. (For more on emissions scenarios, see Human Choice, Warming, & Emissions—The Representative Concentration Pathways.) Note: there isn’t a significant difference between either of the two emissions scenarios. 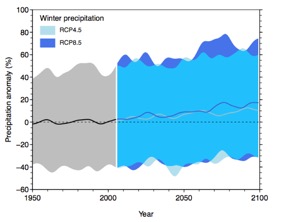 This graph shows projections for winter precipitation for the Pacific Northwest to the year 2100. Note the slight upward trend in precipitation and how it deviates modestly from the historical average. Keep in mind this projection has a low degree of confidence to it. As with the previous graph showing annual precipitation, the winter simulations shown here were run using two emissions scenarios, RCP 4.5 and RCP 8.5. These two scenarios represent medium and high degrees of warming respectively. Note: there isn’t a significant difference between either of the two emissions scenarios. The gray section represents a simulation of the historical period. 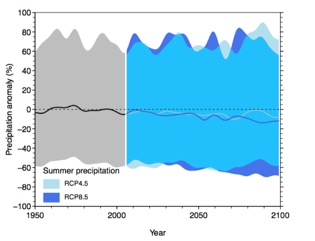 This graph shows summer precipitation projections to year 2100. Note: there is a modest downward trend in summer precipitation that only slightly deviates from the historical norm. And again, keep in mind that these projections have a low degree of confidence to them. As with the two previous graphs, light blue represents the medium-emissions scenario, RCP 4.5, while dark blue represents the high-emissions scenario, RCP 8.5. Note: there isn’t a significant difference between either of the two emissions scenarios. The historical period is shown in gray.

We bring this all up, not because we want to send you down a rabbit hole of unnecessary nuance, but because nothing (or nearly nothing) has caused us more dismay over the years than trying to explain to a general audience what our findings say about precipitation for the Pacific Northwest under climate change. So here goes: unlike temperature projections for our region, precipitation projections for the Pacific Northwest do not have a high degree of confidence to them. Let’s break this down.

There are at least three reasons for this lack of confidence about what will happen to precipitation under anthropogenic climate change. One reason is that the effect of greenhouse gas emissions and other human activities are not as direct on precipitation as on temperature. A second reason is that precipitation is simply a more complex process to model with a computer than temperature. A third reason—and the one that will always exist no matter how good our models become—is that there is a lot of natural variability when it comes to precipitation, especially when compared to the effect that increasing greenhouse gases have on how much it rains. To picture this, consider the old statistical analogy of the so-called fair die.

Think of these die rolls as computer model runs, where every roll equals one model run. Now imagine an unfair die, one that, let’s say, is weighted so the die is much heavier toward the six. Think of temperature as this unfair, or weighted, die. This is a pretty good analogy for a climate model where greenhouse gas concentrations have been cranked up past natural variability; a model, in other words, where anthropogenic warming is at work. Our cranked-up die roll is so heavily weighted toward sixes, or temperature increases, you really don’t need to roll the die very often—you don’t need to run the model very often—before you start to see a pattern. All die numbers are no longer equally likely. Instead, sixes rule the day, temperature rises, and you feel confident that if you were to roll the die again—run the model again—that there would be a high probability that six would be the result. The die of precipitation is another story.

Due to its higher degree of complexity, our precipitation die is more subtly weighted. It’s not a perfectly fair die with equally likely outcomes, but it’s not a perfectly unfair die either. This means it simply takes more rolls, or model runs, to discern a pattern. Run the model once and you might get one outcome, run it again, and you might get a slightly different outcome. That’s the analogy. Here’s the reality.

The reality is the Global Climate Models (GCMs) that climate researchers use aren’t always run often enough to satisfy our exacting search for a definitive pattern. And while this is acceptable, if not ideal, for temperature projections because GCMs produce similar results for temperature under climate change, precipitation is another story. There is a lot of disagreement among models concerning precipitation And because the models aren’t always run multiple times, discerning the subtle weighting in the models is a lot harder. (For more info on why we like to have models run multiple times and in batches called ensembles, see Models: Climate, Hydrologic, Vegetation and More.)

For these reasons, our confidence in precipitation outcomes is lower than our confidence in temperature outcomes. Okay, that’s a pretty long preamble, but keep die rolls and all that in mind when you read our results below.

Under climate change, yearly precipitation in the Pacific Northwest isn’t expected to deviate significantly from its current pattern, according to our analysis. Only 60 percent of the scenarios we used in our assessment—that is models + emissions scenarios, 40 in total—showed a tendency toward an increase in annual precipitation under climate change by the end of this century. Contrast this to the temperature projections we came up with: all 40 scenarios we used showed temperature increasing for our region in this century.

What’s more, the average increase in annual precipitation we observed in our data was only about 5 percent for the scenarios we employed. We also observed a similar nudging of precipitation outside of natural variability for summers and winters. This means our already dry summers might nudge slightly drier in our climate changed-future, while our already wet winters might nudge slightly wetter. However, due to the high complexity/low confidence of these scenarios, as scientists we feel it’s important to again point out that these results should not be taken out of context. We’re taking about projections and not predictions. Probabilities are not prophecies.