By the year 2100, CIRC research indicates that the Pacific Northwest could be 1 to 8 degrees Celsius (2–15 degrees Fahrenheit) warmer than it was during the second half of the twentieth century. These projections come from CIRC’s Integrated Scenarios project, a far-reaching effort to determine what the Pacific Northwest’s climate, hydrology, and vegetation will look like under various warming scenarios projected to occur in this century. 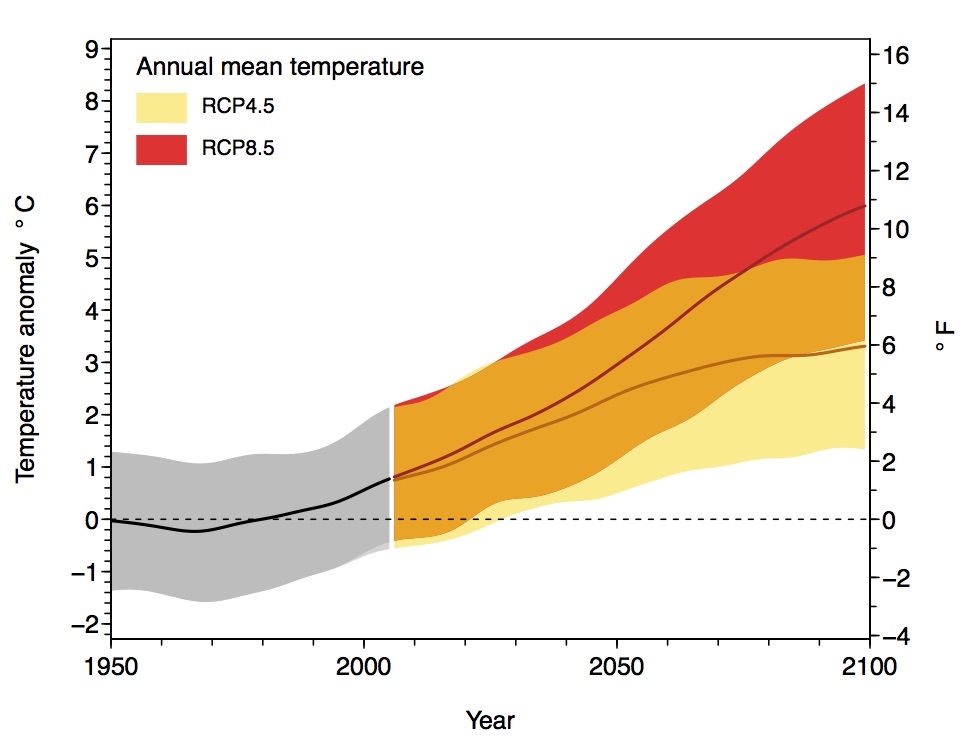 Why the Range in Projections?

The disparity from 1 to 8 degrees Celsius (2 degrees to 15 degrees Fahrenheit) is due in large part to human choice. We can choose to cut our collective carbon footprint, or we can choose to keep things business as usual. In our research, we represent this choice by using two emissions scenarios: RCP 4.5 and RCP 8.5. (To learn more, see Human Choice, Warming, & Emissions—The Representative Concentration Pathways.) RCP 4.5 assumes humanity starts cutting emissions of CO2 and other greenhouse gases in the coming decades, and hence that temperature increases will start to level off. RCP 8.5, on the other hand, assumes we continue emitting at our current rate with warming continuing to rise and not leveling off.

The other reason for the disparity, or range, in our temperature projections has to do with the scientific community’s fundamental lack of understanding just how the climate system will respond to high levels of greenhouse gases. That’s because while all the relevant physical processes of the Earth’s atmosphere and land are represented in the computer models that climate scientists employ, these models, called global climate models (GCMs), nonetheless represent these physical processes somewhat differently from model to model. The end result is this: each individual model tends to produce different amounts of climate change for the same amount of greenhouse gases. (For details on GCMs, see our Modeling & Analysis page.) This does not mean that the results of GCMs are pie-in-the-sky predictions or simply educated guesses; they’re really well-reasoned, physically-based estimates.

This uncertainty between models is one reason our researchers like to employ multiple GCMs when making climate projections. For instance, temperature results for CIRC’s Integrated Scenarios project sprang from data from some twenty different GCMs combined with two RCPs. This ensemble approach—as well as the degree to which the models and scenarios agreed—means we can say with a high degree of certainty that the Pacific Northwest will be warmer in the future. We just can’t say for certain how much warmer. This high degree of certainty is known in climate research as confidence. As we explain later, this same high degree of confidence does not extend to Precipitation projections for our region.